Quality pipes – made in Europe

The Silent-PP piping system is experiencing high growth rates. The plant in Villadose (IT) was therefore expanded in 2014. With a new, fully automated production line, Geberit is setting new standards in pipe production.

The launch of Silent-PP in 2009 saw Geberit introduce its first plug-in and sound-absorbing piping system for building drainage. Within just five years, production capacities had to be expanded in order to meet the high demand for the Silent-PP pipes. In March 2014, an additional, modern production hall was opened in the Villadose plant in the north of Italy. This site – where Geberit’s entire range of building drainage pipes is manufactured – is therefore well equipped for a further growth.

A new, state-of-the-art production line and a new outside storage area were put into operation in 2014, the latter of which greatly improves the efficiency of logistics processes. The integration of the Villadose site into Group logistics enables Geberit to supply its customers in international markets in a timely manner.

In a sector comparison, the Villadose plant performs excellently in the area of energy efficiency. The environmentally friendly cooling system installed in 2014 reduces energy consumption by 50%. The production and office buildings are heated primarily using the waste heat from the compressor units. State-of-the-art electric motors in the production lines also help to save energy. Furthermore, all scrap materials from production are recycled. 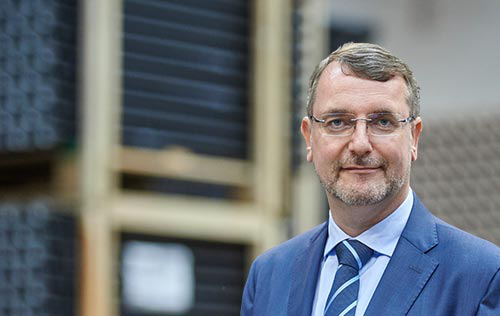 Rainer Prügl is Managing Director of the Geberit production plant in Villadose (IT). In his interview, he explains the dynamic growth of the Villadose plant and how plastic pipes are being produced in a sustainable manner.
Download Center /
My Annual Report (0)  Store page
back
forward
Quickfinder History Deutsche Version