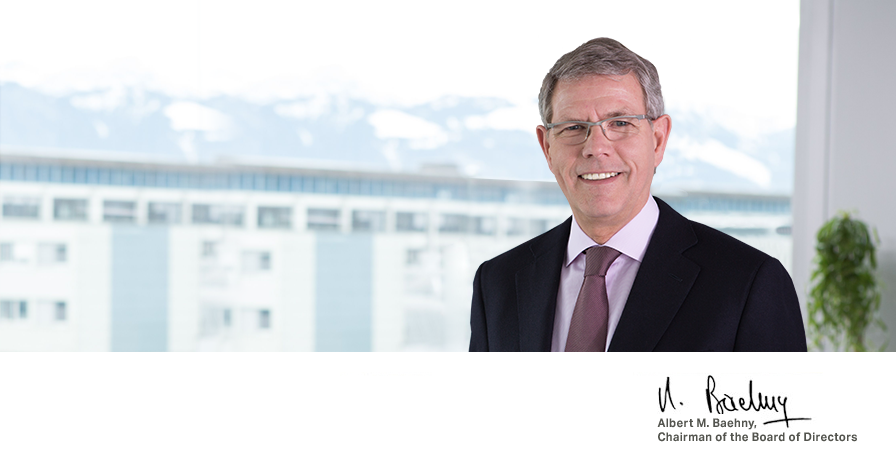 Despite a continued challenging environment, the Geberit Group experienced an excellent 2014. In nearly all markets, impressive sales increases were achieved and market shares gained. The results considerably exceeded the good figures achieved in the previous year.

Cumulative sales in 2014 increased by 4.9% to CHF 2,404.4 million, corresponding to currency-adjusted growth of 6.4%. After experiencing above-average sales growth in the first six months of the year – facilitated in part by winter weather that was favorable for the construction industry – this trend flattened out slightly in the second half of the year, but was still in line with medium-term expectations. The volume growth and a below-average increase in the cost of materials had a positive effect on the results. These factors were partially offset by higher customer bonuses and an increase in personnel expenses. Operating profit (EBIT) rose by 13.0% to CHF 576.9 million, and the EBIT margin reached 24.0% (previous year 22.3%). Net income increased by 14.4% to CHF 498.6 million, with a return on sales of 20.7% (previous year 19.0%). Earnings per share rose in comparison to sales growth by a disproportionately high 14.6% to CHF 13.28. Free cashflow grew by 3.6% to CHF 460.4 million.

Once again in 2014, various new and innovative products were launched. The flow-optimized Sovent fitting facilitates an optimal layout of waste water discharge stacks in high-rises. The flushing system Omega features extra-small actuator plates and a cistern that offers the greatest possible flexibility in any room layout thanks to its three installation heights. The thin actuator plate Sigma70 with patented servo technology floats a few millimeters in front of the wall and impresses with its refined elegance. With an integrated odor extraction unit and a discreet, indirect LED light for orientation at night, the sanitary module Monolith Plus sets new standards in both comfort and style. A further development of a product already successfully introduced on the market is the attractive wall drain for showers.

The concealed cistern celebrated its 50th anniversary in 2014. With more than 60 million cisterns sold to date since its introduction on the market by Geberit in 1964, this constantly evolving product is a real success story. The success of the concealed cistern triggered the development of prewall installations, which allowed bathrooms to be designed with unprecedented levels of freedom. Geberit used the occasion to thank many customers for their years of loyalty, which included hosting carefully prepared events in its markets. A real highlight was the gala evenings to which Geberit invited its most important customers and partners, which included a stage show developed by the company and a meal comprising several courses. A total of 3,800 guests attended these gala events, which represented a milestone for Geberit in terms of its customer activities.

As announced, Geberit made further investments in its production infrastructure over the past year. The new showcase plant in Ruše in Slovenia, which meets the highest standards in terms of green production, commenced operations in the second half of 2014. The pipe manufacturing facility in Villadose in Italy was enlarged by more than 6,500 square meters in order to meet the ambitious growth targets for piping systems.

An increase in logistics capacities was also initiated. The Group’s logistics center in Pfullendorf in the south of Germany now supplies customers in more than 100 countries. In addition to laying the groundwork for future growth, the expansion agreed at the end of 2014 will also see the introduction of innovative technologies and a further optimization of processes. Investments totaling some EUR 40 million are planned for this project. Following completion of the planning stage, construction is planned to start in spring 2015. The work is expected to be completed at the beginning of 2017 so that the extensions can commence operations the same year.

On October 14, Geberit announced that it was making a tender offer for Sanitec. With 6,200 employees, 18 production facilities and 24 sales units in Europe as well as net sales of approximately EUR 700 million in 2014, Sanitec is a leading European producer and supplier of bathroom ceramics. An offer was made to Sanitec shareholders to acquire their shares at a price of SEK 97 each, corresponding to a total transaction value of CHF 1.21 billion for 100% of the shares. The transaction was concluded on February 10, 2015. For Geberit, the acquisition of Sanitec represents an expansion of its strategic focus. The future product portfolio will be enhanced with bathroom ceramics. The new company combines technical know-how in sanitary technology “behind the wall” with design expertise “in front of the wall”. The transaction makes Geberit the market leader for sanitary products and will expand the addressable market. Access to end users and the presence in the showrooms will be strengthened. These aspects are particularly important in those markets where end users are important decision-makers. The transaction enables a promising combination of leading brands in the areas of sanitary technology and bathroom ceramics. The companies complement each other ideally thanks to the excellent reputation of both in terms of the quality and reliability of their products, not to mention their service and passion for innovative strength, refer also to  acquisition of Sanitec.

The development of the Geberit share price over the past year was once again strong. Beginning the year at around CHF 270, the share price rose over the course of the year and reached a new all-time high of more than CHF 340 towards the end of the year. In doing so, it far exceeded the Swiss Market Index (SMI).

The Board of Directors intends to once again let the shareholders participate in the positive development of the business and will maintain the attractive distribution policy of previous years. A dividend of CHF 8.30 will be proposed at the General Meeting, an increase of 10.7% over that of 2014. The payout ratio of 62.7% of net income is therefore in the upper range of the 50 to 70% corridor defined by the Board of Directors. In addition, the share buyback program announced in March 2014 was launched on April 30, 2014. In the course of this program, shares amounting to a total of a maximum of 5% of the share capital recorded in the Commercial Register will be repurchased over a period of two years, less withholding tax, and retired by means of a capital reduction. This share buyback program has been suspended since July 2014 as a result of the acquisition of the Sanitec Group. The Board of Directors will decide whether to resume the program at the appropriate time.

As a consequence of the required amendments to conform to the Ordinance against Excessive Compensation with respect to Listed Companies (OaEC), votes were held this year on numerous amendments to the Articles of Incorporation. The Board of Directors decided to already implement the new rules in the Articles of Incorporation this year as completely as possible, even where the new law would provide for a longer transitional period. The various proposed amendments to the Articles of Incorporation were divided up into two agenda items and put to a vote. The shareholders agreed with the proposals submitted by the Board of Directors and approved the two agenda items. In addition, the General Meeting approved the completely redesigned, comprehensive Remuneration Report for the 2013 business year in a consultative vote.

We credit the strong results in 2014, which noticeably surpassed those of the previous year, to the outstanding commitment, high motivation and skills of our employees in over 40 countries. We wish to express our thanks and appreciation for their exemplary performance. Our customers in the commercial and trade sectors again deserve special thanks for their trust and constructive collaboration. Last but not least, we also wish to express our gratitude, esteemed shareholders, for your continued confidence in our company.

Owing to the tense situation in the majority of the European construction markets, 2015 will again be a demanding business year for the Geberit Group. Hopes for a moderate global economic upturn have been dampened in recent months. Market forecasts indicate that this will directly impact the construction industry. The significantly strengthened Swiss franc is also contributing to the more difficult conditions. Accordingly, the present year, measured against the very good results achieved in the previous year, represents a challenge. In spite of everything, the objective – not only in the few markets that are healthy but also in the large number of markets that are shrinking or stagnating – is to provide a convincing performance and to continue to gain market shares as in previous years. The focus will fall on the concerted marketing of the new products introduced in recent years, the more intense penetration of new markets and on the very promising shower toilet business. In line with the Geberit strategy, these measures will be accompanied by efforts to further optimize business processes. The integration of Sanitec’s activities in the Geberit Group will also be driven forward in this and with equally high priority. The management is convinced that the company is very well equipped for the upcoming tasks and challenges.