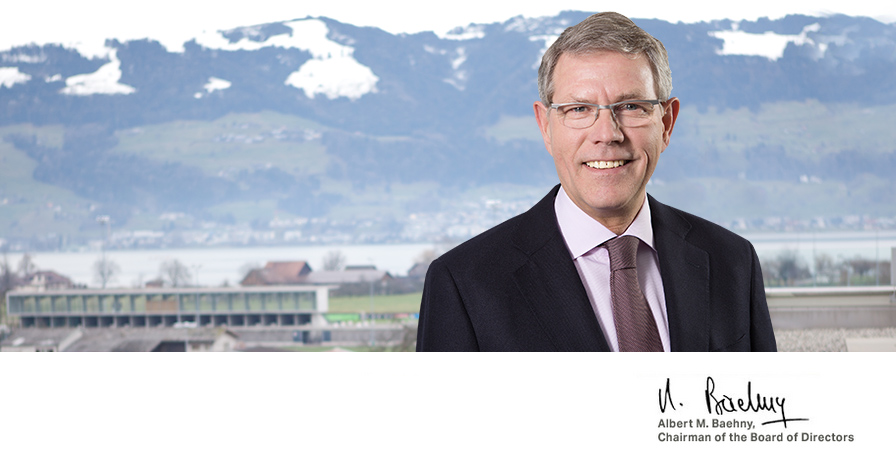 The challenging environment in the construction industry, the integration of the acquired Sanitec business and the strong Swiss franc shaped the Geberit Group’s results in the 2015 financial year. Despite this, starting from a very high level, we managed to achieve a good overall result and further consolidated our position as the leading supplier of sanitary products in Europe.

Net sales increased by 24.2% in 2015, to CHF 2,593.7 million. Total growth comprised organic growth in local currencies of 2.7%, a negative foreign currency effect of 9.6% and an increase of 31.1% due to the Sanitec acquisition. Operating margins were positively influenced by beneficial volume and product mix effects, as well as lower raw material prices. These were offset mainly by the dilution of margins due to the integration of Sanitec and the effects of the 10% currency rebate granted in Switzerland. The results comprise various special effects in connection with the Sanitec acquisition. Operating profit (EBIT) adjusted for these special effects increased by 2.4% to CHF 590.9 million and the correspondingly adjusted EBIT margin came to 22.8%. Adjusted net income fell by 1.1% to CHF 493.1 million, with an adjusted return on net sales of 19.0%. Adjusted earnings per share declined by 0.4% to CHF 13.23. The reported values amounted to CHF 498.3 million for the EBIT (EBIT margin 19.2%), CHF 422.4 million for net income (return on sales 16.3%) and CHF 11.33 for earnings per share. Free cashflow rose by 5.1% to CHF 484.0 million.

The 2015 financial year was dominated by the acquisition and integration of the Sanitec Group. In October 2014, the Geberit Group set a new strategic direction with its takeover bid for Sanitec – a leading European manufacturer and supplier in the sanitary ceramics segment. The acquisition was completed in the following February. As a result of the combination, the Group grew by 6,200 employees, 18 production plants and 14 European brands with strong local anchorage. Thanks to this step, Geberit is now ideally positioned to create added value in the bathroom with innovative solutions. The combination of perfectly functioning technology behind the wall and sophisticated design in front of the wall is where the future lies.Geberit is the European market leader for sanitary products and will, in particular, strengthen its position in regions such as the Nordic Countries, France, the United Kingdom and Eastern Europe, in which the company has not yet gained a substantial foothold. The integration activities, which began in the second quarter of 2015, went according to plan. By the end of 2015, the main organisational work was completed. In particular, the aim of operating as a single company in sales activities on all markets by 1 January 2016 was achieved. The focus in 2016 will be on further harmonising processes and realising initial synergies.

The forward-looking, continuously optimised product portfolio is an important factor for the success of Geberit. The company again expanded its proven range with major innovations in 2015, thereby extending its market position. The CleanLine shower channel is one example, combining a high-quality finish with simple, safe installation while at the same time being easier to clean than conventional shower channels. The market response to this product so far has exceeded all expectations. Another example is the compact sanitary flush unit with new control and sensor technology, which prevents the spread of bacteria and germ populations in pipes with standing water, by automatically rinsing them when required. Also launched in 2015 was the new Geberit AquaClean Mera premium shower toilet, which sets new standards in this category.

As already announced in the last annual report, with a view to future growth and the continued optimisation of existing logistics processes – and irrespective of the Sanitec acquisition – the decision has been made to further expand capacities at the Logistics Center in Pfullendorf and invest around EUR 40 million in this. The groundbreaking ceremony for the extension was held as scheduled in the spring of 2015. The work is expected to be completed at the beginning of 2017 in order that the extensions can commence operations the same year.

The development of the Geberit share price was pleasing. The share price grew – in contrast with the Swiss Market Index (SMI), which posted a drop of 1.8% – slightly by 0.5% to CHF 340.20. Despite the slightly lower earnings, the Board of Directors intends to once again let the shareholders participate in the essentially solid development of the business and will maintain the attractive distribution policy of previous years. Therefore, a dividend of CHF 8.40 will be proposed at the ordinary General Meeting, which is slightly higher (+1.2%) than in the prior year. The payout ratio of 63.3% of adjusted net income is thus in the upper range of the 50% to 70% corridor defined by the Board of Directors. Furthermore, the ongoing share buyback programme was continued. By 31 December 2015, shares worth CHF 205 million had been acquired, which equates to around a third of the originally planned, entire programme. The share buyback was suspended from July 2014 until March 2015 as a result of the ongoing Sanitec acquisition, which is why only around 2% of the share capital – or some 40% of the originally planned amount – was repurchased by the completion of the programme at the end of February 2016. A proposal will be submitted to the 2016 ordinary General Meeting to carry out a capital reduction in the amount of the total repurchased shares and to cancel the shares.

We owe the good results in 2015 and the integration of the Sanitec activities, which is so far going according to plan, to the high degree of motivation and professionalism of our employees in over 40 countries. We wish to express our thanks and appreciation for their exemplary performance. Our customers in the commercial and trade sectors again deserve special thanks for their trust and constructive collaboration. Last but not least, we also wish to express our gratitude, esteemed shareholders, for your continued confidence in our company.

The Geberit Group’s 2016 financial year is expected to be further impacted by the integration of Sanitec’s activities. Since 1 January 2016, the sales organisation is operating as a single company in all markets; as already mentioned, another focus shall also be on the further harmonisation of systems and processes and realising initial synergies. Just as important shall be the focus on Geberit’s daily business, which is expected to be a challenging undertaking once again owing to the situation in the European construction markets. The objective shall be to provide convincing services in all markets with the new joint sales force and, as in previous years, gain market shares. The main focus shall fall on the concerted marketing of the new products introduced in recent years, the more intense penetration of markets in which Geberit products or technologies are still under-represented and on the very promising shower toilet business. In line with the Geberit strategy, these measures shall be accompanied by efforts to continuously optimise business processes. The Board of Directors and the Group Executive Board are convinced that the company is very well equipped for the upcoming opportunities and challenges.